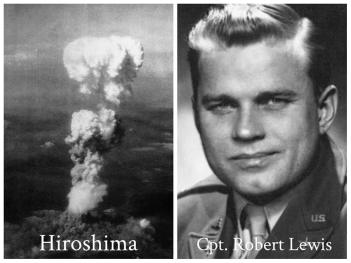 “My God, what have we done?” How many did we kill? ‘I am certain the entire crew felt this experience was more than anyone human had ever thought possible. ‘If I live a hundred years I’ll never quite get those few minutes out of my mind.’..
These were the words by Captain Robert Lewis recounting his experiences as a co-pilot of Ebola Gay, the military aircraft that dropped the Atomic bomb on the fateful day of August 6, 1945, which change the course of not just World War II but also human history.

Once in a while, during a Past Life Regression Therapy workshop we come across a unique case or an important lifetime. A woman came with a unique skin problem of “Keloid Scars”. Caused by overgrowth of scar tissue over a wound, as a result wounds never heal, just behind lumps of tissue. Medically, little treatment is available, so she sought help of Past Life Regression to find answers to this problem. Her another problem is erratic menstrual periods, which would start suddenly, creating havoc in her work life.

After a PLR session, she shared a startling discovery, that probably she was one of the pilots on the Ebola Gay. So in next session she was asked to explore further as clearly it was an important lifetime. Since she wasn’t sure the first time, whether it was real or not, I asked her to get the name of the pilot. It was Robert Lewis, which turned out to be correct upon checking on internet.

However, the crucial thing was healing the lifetime, so as it happens in the workshop, individual are also personally guided one by one, during group discussion to achieve effective healing.

She found that the pilot had immense guilt and had cursed himself to suffer the same as the people of Hiroshima. That explained the ‘unhealing’ wounds.
As this healing was happening, I could sense thousands of souls still in need of healing and closure standing on the grounds of Hiroshima. They hadn’t crossed over. Guides and Angels were called in, she saw them being filled with healing light and subsequently asked forgiveness from all of them. Gradually as they start forgiving her and got healed of the trauma, they started rising up into the light. Soon all had crossed over into the light.

Now with the help of spiritguides the pilot was healed and guided to drop his anger at himself, self-hate, guilt and eventually the curse. The healing was complete. What an opportunity, nearly 71 years later.

Next day, she came feeling light, as if a burden has been lifted on her back. “Now I know it was true”, she admitted. She is already into Reiki healing and wants to now dedicate her life into healing arts. She added, “The guidance for me for this birth is to learn “love and patience”. Best experience of this workshop is that I finally know who my angel and guide are and I know I can seek their advice as and when I need it.”

Update: Within in a few weeks her erratic menstrual periods problems was completely healed. Slowly other areas of life too are slowly beginning to heal.